Okay, with the sky more of less finished, I moved onto Hogwarts itself and the hillside.
I wanted to place lots of artificial lights and moon light to create a contrast between the dark night.  I love the contrast between night time and artificial lights, and paintings with flat light do not interest me.
For the dark night colours I mixed up some blue, black and white.  I wanted to add the blue, as pure grey wouldn't have been very interesting.  To contrast this I used some warm yellow and a little white to create the artificial light and it's affect on it's surroundings.

To paint the dark areas at this point a used just maybe 3 tones of the blue/black mix ... a bit like the cel shading technique.  I then used the dry brush technique to add in the warm yellow once the blue/black was dry (the "dry brush" technique is when you have just a little bit of paint on your brush and you even try to rub some of that off with a tissue).  Then draw your brush lightly over and over the area till the paint starts to take to the surface and continue till you get the correct amount ... I do love this technique!  But you probably want to use an old brush as it can ruin it eventually.

I then moved onto the water.  this was done quite quickly with an initial flat all over very dark grey with some blue, then once this dried, I used the dry brush technique again with a large brush and a much lighter version of the base colour (just added some white). to create the "peaks" of the waves which are obviously lighter in colour.  I also added the moonlight hitting the water.  To create some depth I made the waves bigger as I got more into the foreground. 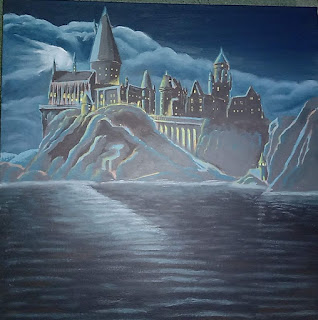 You can see it is starting to take shape now :-)

Next, it was a lot of tidying up and adding more artificial light sources (to give loads of lovely contrast).  I then used the dry brush technique again to show the light hitting the hill side / buildings.  I maybe went to town on this a bit much .. but I think it looks okay? 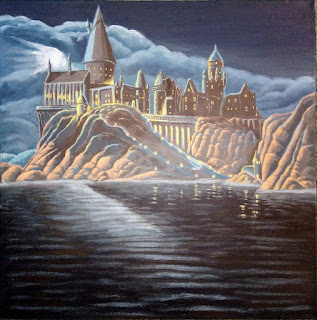 To finish the painting I added all the year 1 pupils from Hogwarts (so Harry Potter, Hermione Granger, Ron Weasley etc) taking the boats over to Hogwarts with Hagrid.

Again, I added yet more artificial light in their little torches and more reflections of this on the water.  Then painted the boats dark blue/grey ... just slightly lighter than the water.  Finally, I added the light contrast on the boat edges and the pupils heads ... and it was finished ... apart from signing it :-) 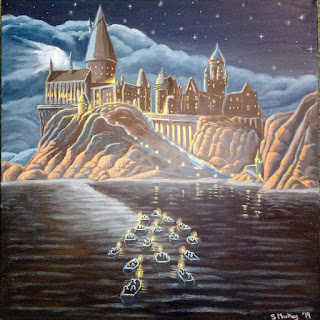 If you're interested, I have this painting for sale on Etsy.

I've always loved the scene in the 1st Harry Potter film where Hagrid is taking the year 1 kids over to Hogwarts (the 1st time we see it) in the small boats.

I spotted a painting of it recently online and thought I'd have go at my own version.

It's painted on canvas (40x40cm) using acrylic.  The canvas was already primed with gesso (can you actually buy a canvas these days that isn't primed?)

Anyways, I blocked in the rough outline of Hogwarts, with clouds and the moon peaking through, and just blocked in the sea as a dark blue - only spent may be 10-15 mins on this stage.

I then set about doing the sky / clouds and moon.  For the sky I mixed up some black, blue and a touch of white in a pot.  I used a large flat headed brush and did long strokes across the canvas, after a couple of brush widths I then added a touch of white and blue to the mix to lighten the colour slightly as I move down the canvas.  Continue to add a touch more white and blue to the mix to lighten a bit as you move down.  Sometimes it can create a banding effect (especially if you have added to much white/blue, so that the difference to the previous colour is too much).  If the paint is still wet you can fix this by mixing the edge of the "bands" together a bit more.  If the paint has dried then I would suggest using the dry brushing technique to blend in the "bands".  To dry brush, apply the paint (matching the colour of one of the bands) to an old brush, and then wipe/brush of 95% of the paint of the brush with a tissue.  Then initially, lightly stroke the brush over the edge of the bands, and as there becomes less paint on the brush, you can add more pressure to it.  Eventually, the bands should disappear as you shade in the edge of the each band.

For the clouds, I mixed up a similar (but lighter colour), mixing wet in wet, and darkening and lightening the clouds - trying to be quite free and see how the clouds start to come alive.  Obviously, the clouds are lighter at the top and nearer the moon, but they will have different layers and some will be more prominent which will create different effects.  I use the brush strokes to show the shape and structure of the clouds.

To paint the moon behind the clouds / peeking through - I mixed up a very light blue grey and made a rough circle.  Where the clouds were thinner I showed some of the moon light getting through the clouds, and for the thicker clouds - no light gets through.

I probably spent an hour getting the clouds / sky / moon right.

Here's the painting at the end of this stage ... 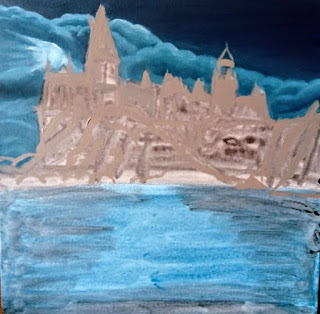 Painting when you're colour blind

So, I'm partially colour blind (mostly red, green), and this can obviously lead to problems when mixing colours etc.

I've seen myself trying to mix some leaf green and then worrying it looks more like brown (even though I didn't use any red!).

My wife is my "go to" on any colours I'm struggling with and I'll harass her from time to time whenever I'm not sure on any colour.

I also now tend to buy more colours than I really need i.e. greens to save mixing them when my wife isn't around.

My third trick is to jot down my colour mixing successes after I mix them up - I have loads jotted down on my phone :-)

And my last trick, is that I've downloaded an app to my phone which tells me the colour of anything I aim my phone at.  It's a great little app from the Android Play store called "color blind".

I'm not completely colour blind, and I didn't realise I even had an issue till I took a colour blind test at school (the one where you see numbers in coloured circles) and only got 13 out of 25.

I did another colour blind test (https://colormax.org/color-blind-test/) while writing this article and I only got 33%.  Looks like my son has it as well, as he couldn't see all the numbers either - although he did do slightly better than me.  My Wife got 100% in the same test. By the way, colour blindness affects more boys than girls (1 in 12 boys, and 1 in 200 girls)

Here's some the tests; 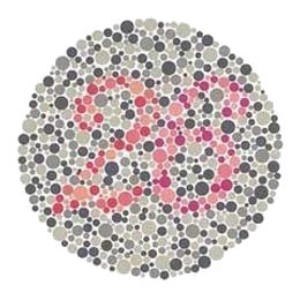 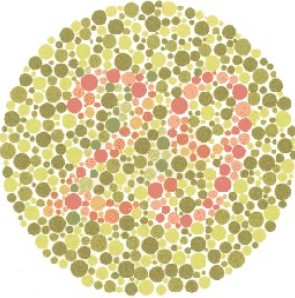 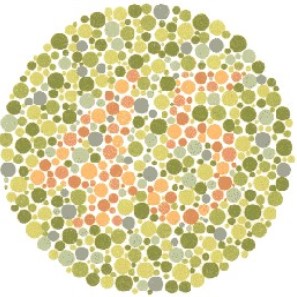 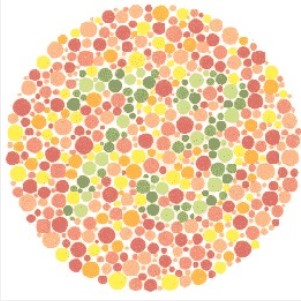 Now, you're probably thinking this restricts my art/painting quite a bit.  But with my 4 counter measures above (buying more colours, asking my wife, writing down all my colour mix recipes, and using the color blind phone app) I seem to manage okay.

One of my friends suggested I just paint as I see and this would give a unique look to my paintings - and most of the time I do paint as I see (until my wife says to me why are you painting that object blue when it should be purple, and then I change it)

There have been a number of famous artists that were colour blind, and it doesn't seem to have held them back https://www.easyframe.co.uk/NewsArticle/colour-blind-artists

You can now also get glasses to "help" you if you have a particular type of colour blindness (chroma/patron).  I've never been properly tested, so I'll probably get this checked out on my next eye test.  They don't seem to fix your colour blindness though, but they can help
https://www.forbes.com/sites/sethporges/2015/04/28/can-these-glasses-really-fix-color-blindness-we-put-them-to-the-test/

So, an acrylic painting is waterproof once it's dry ... so I wondered what is the point of varnishing it!


I must admit I love the effect after varnishing, it really makes the colours come to life!

Note: Make sure you take all your photos of your finished painting before applying a gloss layer.  Once the gloss varnish has been applied it's nearly impossible to take a photo of the painting without glare.  If you're using a matte layer you're probably okay to take photos after varnishing.  I only varnish using gloss varnish - as the enhanced colours/sheen of the painting is the main reason I varnish it in the first place.

Note #2: Make sure you leave the painting to dry for at least 24 hrs before applying the varnish!  You don't want the paint and varnish to mix together ... although maybe that would create an interesting effect :-)

Note #3: Test out your varnishing technique on some old canvases first before going anywhere near your current work!

I use Windsor & Newton Galeria Acrylic gloss varnish.  To be honest, initially it was just the one I bought in my local art shop- but it works really well for me.

Finally, I personally don't use an isolation layer (although many people do),  If you want to remove the varnish at a later stage, then you may want to add an isolation layer first.  I see it as an extra (and most cost) stage that I don't need. 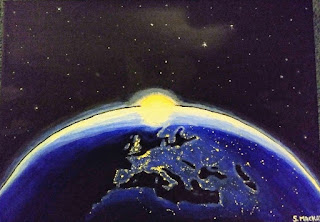 You'll need a large brush (only to be used for varnishing), a container for pouring the varnish into, somewhere to lay the painting down completely flat for a few hours, and something to place it on i.e. some old cardboard 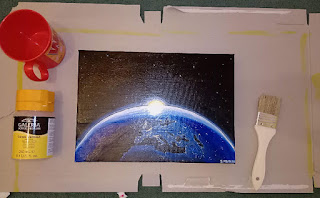 Give the varnish a gentle shake before using, and pour a little bit of it into your container (I used far too much the first time I tried to varnish a painting).
Dip your brush into the varnish and do some nice broad strokes across the length of the painting to give it a nice even coat, continue down the length of the painting until it's completely covered.  Leave it to dry for a couple of hours. 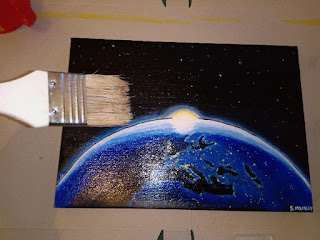 I usually add a second coat of varnish, but make sure you leave 24 hours before adding the second coat.  Again, leave it to dry for a couple of hours and then you're done.

Make sure you thoroughly wash out your brush and container - and just keep them for varnish use only.